Posted by Posilicious on September 21, 2020 0 Comments

It’s difficult to say anything on the internet that hasn’t already been said better by someone else. I make no claim to have succeeded; however, there are so many loudly screamed opinions about Trump’s pending (possible) Supreme Court pick to replace Ruth Bader Ginsburg that it might benefit us to just embrace the suck and get to work fixing things. And to do that, we probably need to admit that a lot of the current political debate is pure unadulterated bullshit–an idiotic waste of time and energy that can be better spent elsewhere.

Before getting into this, and regardless of political affiliation, we should all take a moment to mourn the loss of a great jurist and human being. Few if any of us will do more, more passionately and consistently, in support of what we believe than RBG. She leaves behind a powerful legacy, and while many of you may not like that legacy, you still have to admire her intellect, conviction and tenacity.

Now, back to the stupid things people are saying bout her replacement:

1 / Trump Won’t Pick a Replacement before the Election

Of course he will. The man has less impulse control than a rat addicted to heroin. And in this case, it’s also the politically beneficial thing to do. He can leverage the offer of a Pro Life supreme court seat with evangelicals until the end of time, and win or lose, there nothing that will energize his base to vote more than the prospect of getting rid of abortion protections at the national level. If he’s smart, he’ll sit down with them to demand concessions, support and money for his campaign before the pick is announced, but either way, this is going to happen. The only question is how many seconds will pass between RBG’s funeral and the announcement.

2 / Picking a Replacement Now is Hypocritical

This particular screaming match is hysterical. Democrats are screaming that Republicans are being hypocritical given their stance on Obama’s pick of Merrick Garland in 2016, when the GOP-led Senate refused to even have a hearing (which is why Trump was able to appoint Neil Gorsuch right after taking office). They’re not wrong (it is blatantly hypocritical), but who cares? It’s only hypocrisy in the abstract; Democrats would appoint someone in the last thirty seconds of someone’s administration to protect things like abortion rights, as they should. The only stupid part was every believing Republicans in the first place. They lied. It worked. They’ll do it again.

On the flip side are condescending comments from independents and centrists who claim it’s hypocritical of Democrats to take the position that Republicans previously had on last-minute (day, month, year) Supreme Court appointments. To them I can only say, no, it’s not wrong or hypocritical to hold others to standards they themselves created. There is no equivalence here. But there is a good deal of naiveté.

Of course they will; the evangelical base would never forgive Senator McConnell or the GOP if they didn’t. I can guarantee you there are only three things going on in the Republican side of the US Senate right now: (1) meetings on how to have an expedited, almost pro forma hearing process to get the SCOTUS pick approved, regardless of who it is, probably with a lot of high-fives and refrains of the “witch is dead” and shots of expensive whiskey; (2) meetings on how to disenfranchise as many poor POC / Democratic voters before the election as possible; and (3) meetings on how to create enough doubt about the election process that any loss will result in social upheaval and lawsuits that can be reviewed by the new, Republican Supreme Court. They’re probably all the same meetings.

Senate Majority Leader Mitch McConnell (R-Ky.) said in a floor speech Monday that the chamber has “more than sufficient time” to confirm a replacement for Supreme Court Justice Ruth Bader Ginsburg before the election, and accused Democrats of preparing “an even more appalling sequel” to the fight over Brett Kavanaugh’s confirmation.

4 / “Honorable” Republicans Will Vote against this Pick

Maybe Senator Romney will stand up to his GOP colleagues, because he’s rich and they already hate him. The other nominal swing votes will just use their leverage for back-office promises, more power and money. Sen. Lamar Alexander has already made it clear he’s on the side of an appointment before the election. Any other Republican who denies evangelicals multi-generational control over the Supreme Court will be lit on fire at the polls, maybe literally and eternally.  I suspect Senators Collins and Murkowski are straight up lying just to increase their negotiating power. It’s best you just get ready for someone so far to the right the left will need binoculars to see her giving you the finger.

Update (9/22/20): Sen. Romney says he supports vote before election. And that’s the end of that. The vote will happen, and Trump’s pick will be approved.

I’m not sure anyone actually thinks this, but just in case: Trump could theoretically wait until after the election to do this because he’ll have months of lame duck power and it might seem more politically honorable, but he won’t–he needs to own the court prior to the election to maximize chances of keeping himself in office. This decision is driven by pure fear of losing office and the power he has today in a contested or losing election. You think he wants to quietly fade into the background and do bad real estate deals in Manhattan? He thinks he deserves to rule the world, forever, hand-in-hand with Putin. And he wants a court that agrees.

This is a real threat in the long term, but the reality is women have already lost reproductive rights at the state level. It’s just that a lot of coastal liberals don’t seem to have noticed that poor women and women of color living in rural / Midwestern states lost practical access to abortion a long time ago. 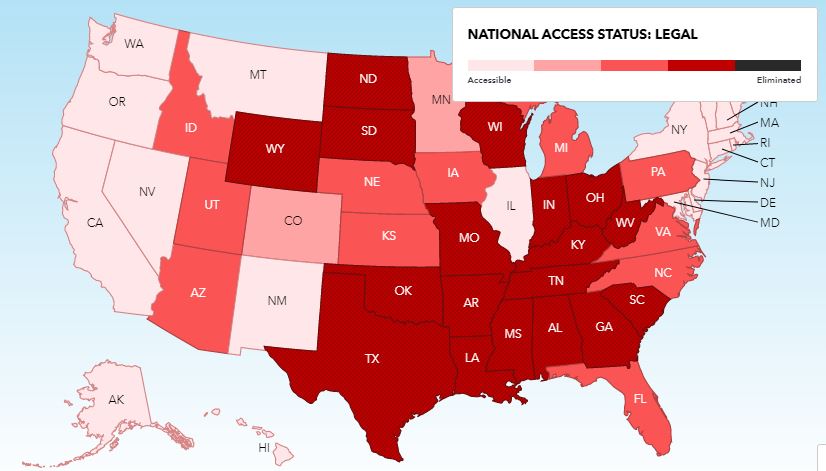 The benefit of this outpouring of rage about RBG might be that we actually do something to protect their rights as well. But in the short term, states that have access to abortion and birth control will continue to, and states that don’t…still won’t. Note that this doesn’t mean the appointment won’t spell disaster for many liberal policies (e.g., DACA, ACA), just that it might take a while in some cases.

Update Sep 9, 2021: Well, have to say the court’s attack on Roe was faster than I expected. It’s still limited to states where it was already at risk, but damn. Gotta admit this is much worse than I anticipated.

7 / RBG Was Right Not to Step Down Under Obama

Sorry, but she was just plain wrong. This is what’s troubling with the far left and right in our country today; they never take responsibility for their actions. Bernie Bros were never responsible for Trump’s election win over Clinton, and RBG’s decision to put the entire country at risk so she could avoid having a less liberal appointee to replace her was inherently selfish and short sighted. The same is true of the equally elderly Justice Breyer, who should gracefully tire as soon as politically possible. I loved RBG beyond words for what she did for women, but that decision could unravel a lot of what she accomplished. And there’s a very real risk that we’ll face at least one constitutional crisis in the near future because of it.

Update Sep 9, 2021: 100% right on this one. We’ll be paying for her not stepping down for generations, or at least a lot of poor women will.

If there’s even the slightest doubt about the election, even one state with dubious results, one weird mail-in voting count, and this election will end up adjudicated at some level by the Supreme Court. You think Bush v. Gore was a stunning blow to our democracy? You ain’t seen nothin’ yet.

Update 9/23/20: It’s already started, according to The Atlantic:

The worst case, however, is not that Trump rejects the election outcome. The worst case is that he uses his power to prevent a decisive outcome against him. If Trump sheds all restraint, and if his Republican allies play the parts he assigns them, he could obstruct the emergence of a legally unambiguous victory for Biden in the Electoral College and then in Congress. He could prevent the formation of consensus about whether there is any outcome at all. He could seize on that un­certainty to hold on to power.

They absolutely will. If RBG is replaced by a conservative, the progressive left will see it as a mission to pack the court (say, by adding two members and immediately appointing two new liberal justices).

But other Democrats have been less reticent. “Mitch McConnell set the precedent. No Supreme Court vacancies filled in an election year. If he violates it, when Democrats control the Senate in the next Congress, we must abolish the filibuster and expand the Supreme Court.” – Sen. Ed Markey (NY Times)

Some Democrats including Biden may see the horror of this — that the new standard is any time you get Congress and the Presidency, you pack the court with enough justices to own the court for your presidential term — but it’s not clear they’ll have the backbone to stand up to their more liberal colleagues. The net result will be an even more politicized and partisan court, even more partisan elections, and a country constantly at war with itself.

10 / Any of this Will Save or Destroy the Country

It won’t. Our country was already stabbing itself in the heart, repeatedly and enthusiastically, and the wounds are obvious: in 1986, we threw out the Fairness Doctrine and allowed the spawning of purely partisan news outlets; in 2010 the Roberts’ court decided to allow nearly infinite money in elections in Citizens United v. FEC; in 2013, that same court threw out major parts of the Voting Rights Act in Shelby County v. Holder (RBG dissented); and in 2019, the court refused to address partisan gerrymandering in Rucho v. Common Cause. These are but a few and almost random examples, independent of the fact that we have somehow stopped caring about the national debt, the death of hundreds of thousands by pandemic incompetence, and far more. Our country was on a steep downhill race to toward factionalism, tribalism and a seesaw of irresponsible fascist and socialist policies long before RBG contracted the cancer that would eventually kill her. Within a generation, we’ll be a second-rate power begging China for more loans to cover our irresponsible spending on unwinnable internecine wars. We’re just bleeding out while people scream over the body. They say that all children are doomed to become their parents. I guess we’re doomed to become a giant schizophrenic version of the United Kingdom.

I’m not sure. Like a lot of people, I’m struggling to look past grief, anger and cynicism for the right answers. My only point in this post is that it’s a waste of time to pretend things are not what they are; we are in dark times, but we don’t have to make them worse by stumbling around in the dark like idiots. Knee-jerk reactions won’t help. Eye-for-an-eye policies won’t help. When we have a free second and a clear mind, we need to step back and take a very real look at our country and figure out how to save it. I can guarantee you it won’t be easy, but it’s better than the short-term gratification of vengeance and political violence.

In terms of the Supreme Court and Ruth Bader Ginsburg’s replacement, take a deep breath, and get ready for a pretty tough defeat–a defeat that will hurt for a long, long time. And then let’s come up with a plan to make sure nothing like this ever happens again.