Are women better coronavirus leaders? This meme would have you think so. I should emphasize that I don’t know or care if they are; I just want fewer people to die. That said, I can’t stand memes based on bad logic, data or premises that do nothing more than reinforce people’s confirmation bias and drive us all further apart. This meme falls squarely in that bucket.

“COVID-19 is everywhere, but countries with heads of state managing the crisis better seem to have something in common…” 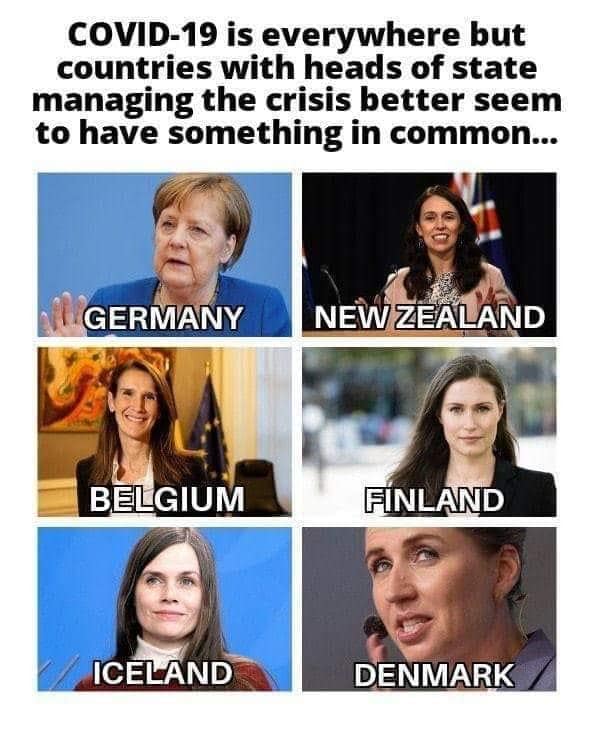 It’s hard to know where to start, as it’s so patently obvious, but let’s just run through it.

Without even bothering to look at the data, imagine that this meme  showed six men instead of six women. Would that be just as acceptable? I only ask because people are constantly asking, “What’s the harm in saying something positive about group X?” and the answer is, nothing. What’s harmful is saying something that implies one group is superior to another group, rather than just calling out something positive, which this meme obviously does by using the word “better”. If the title was just, “Here are six women doing great jobs leading countries during the pandemic,” I wouldn’t care, but the obvious intent is not positivity. This meme is just another clever assertion by one group that they’re better than another. Which is bigotry. Period.

Now, instead of replacing the meme with men, just notice that all the women are white. So, while the obvious intent of the creator was to show that women are better than men, the exact same “data” set without even changing the title leads to the conclusion that white people are better than people of color at managing countries during times of crisis. Is that the intent? Probably not, but if the exact same data and the exact same logic leads to that conclusion, then you should absolutely question the underlying logic of the meme. The identical exercise could be carried out based on sexual  orientation (most of the women are heterosexual) or ability (most of the women are not disabled). In other words, just cherry pick which group you think is superior to another, and off you go! Bigotry is great when it works in your favor.

No Definition of “Better”

This gets into the meat of things. Is a country doing a better job if they have fewer cases (e.g., New Zealand), or more cases with better testing (e.g., Iceland, Germany)? Is a country doing better if they have more tests, or does the timing of those tests matter as much as the volume (e.g., Germany early vs. USA late)? Since the meme doesn’t tell us what “better” means, I’m just going to assume the creator cares about human life and is basing his/her ranking on deaths–and more specifically, deaths per million (thereby normalizing for different country sizes). And this is where things really fall apart. (BTW, it doesn’t matter which criteria you pick — the flaws are the same in every case). Why?

Because the six countries shown in this meme cover such as vast range of deaths that it’s absurd to even compare them. According to Worldometer (which I’m basing all analysis here on, just to be consistent), here are the basic stats for these six countries, and some others, by end of day GMT-0 on April 10, 2020 (the day I saw the post):

As you can see, the range of deaths per million for these “better” run countries goes from 0.4 in New Zealand (great) to 260 in Belgium (terrible), and actually third-worst in the entire word if you exclude itty-bitty countries like San Marino. And the USA, a male-led country with a rate of only 57.0 deaths per million is crushing Belgium. In fact, even if you exclude countries with less than 300,000 people (the population of Iceland), there are 116 countries in this same range (0.4 to 260 deaths per million), almost all of which are run by men. In other words, if this is the criteria being used, the theme is not only misleading, it’s an outright freaking lie.

Of course, there’s no way to know. Maybe the criteria is “Leaders who say positive stuff,” “National lockdowns that started early,” “Leaders without penises” or something else. There’s no way to know what criteria are being used, which by itself should tell you its subjective and utterly meaningless as a data set / meme / thought process. So you can just continue to believe whatever you want to believe (which I assume, is that gay people can’t run countries during viral outbreaks). Kidding. LOLs.

Bad Data Makes it Impossible to Do Better

It doesn’t matter where you go, you’re not going to find good data. Worldometers’ data, for instance, is a beautiful aggregation of ugly, inconsistent and easily manipulated data. The New York Times, Johns Hopkins and many others have equally wonderful graphs and tables based on crap information (GIGO, as they say). Countries are at different places in the outbreak in terms of days-from-first exposure, some are democracies and  others are dictatorships, some are tiny islands and others are vastly interconnected international population centers, and all of them use different reporting criteria. Literally the only thing you know about coronavirus data right now is that it sucks, and making politically charged statements or inferences based on that data is irresponsible at best, malicious at worst.

The Only Thing We Know is Your Confirmation Bias

If you  looked at this meme and thought, hey, that sounds about right, then your probably a woman / feminist and probably listen to a lot of media that tells you how wonderful you are. If you saw it and thought, hey, that’s feminazi propaganda, then please wave at Fox News for me. If you saw it  and thought, huh, that sounds kinda funny or positive even if I have no idea if it’s true or not, then you’re probably like most people and don’t have time to research the facts under every damn Facebook post. The only thing you can truly learn from this meme, or take from this blog post, is that you have confirmation bias (as do I) and you can choose to let it lead you around by the nose…or you can chose to think for yourself instead of letting strangers on Facebook do it for you.

Well, it’s boring, but just post a meme of six leaders of any gender / race / orientation doing a great job, and thank them for it. I know; it’s no fun unless you can stick it to people you hate or look down on. Sorry.

Caveat: I’ve only done three of these “Stupid Political Meme” posts, and all three were about nominally liberal memes. I’d like to do as many or more on conservative memes, but the ones I see are so hateful or self-evidently biased that I haven’t bothered. Not an excuse, but perhaps that reflects my bias in some way.

Caveat 2: I hope it’s obvious, but the intent here is not to criticize anyone; if I saw this  in your feed, I don’t mean to attack you. It’s the meme I’m talking to. Bad, meme! Bad!