No one is really sure what the “average” coronavirus death rate by country really is today, what it will be in the end, or when the end (of the pandemic) will be. This post is just a discussion based on a snapshot in time to answer some common questions (and questions of my own). Nothing here is scientific, vetted or more than personal speculation. I mentioned here a week ago that 2% is probably a reasonable “target” death rate absent other information, but that was speculation then, and remains speculation now.

The following table shows a coronavirus death rate ranging from 0.4% in Germany to 9.5% in Italy, more than an order of magnitude difference for two developed democracies on the same continent. The USA is currently showing at 1.3%, but is far earlier in the epidemic than either European country.

(*) Statistics are for selected countries at 6:00 pm Pacific Time (USA), as taken from Worldometers.com.  This represents a snapshot in time, and may not be accurate based on later-updated information. Countries shown all had more than 1,000 cases and more than 10 deaths, but were selected from that subset to show scale of results (i.e., nothing here is random or representative of anything).

How are coronavirus death rates changing?

Not sure yet. There is an excellent article on this same subject in Business Insider from March 18th that was sourced from Johns Hopkins. Some countries are going up a bit, some down, but some have seen increases of more than 1% (e.g., Spain) and none have dropped by anywhere near that much. On a positive note, the US rate has dropped by more than 0.3%, but this is likely just because the outbreak was so new to our shores a week ago. 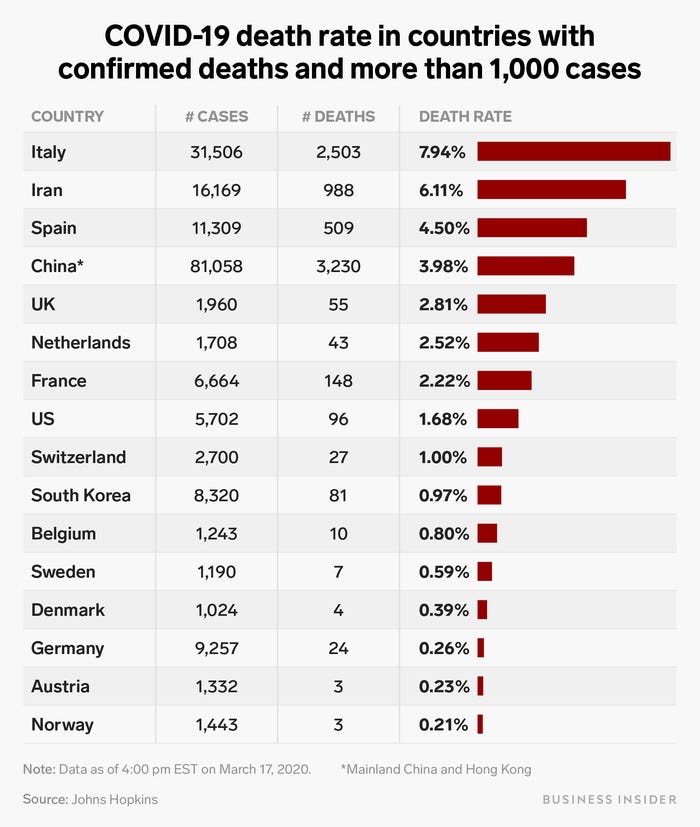 You can also see how things change over time and based on reported data in this March 5th CDC YouTube video:

Why are Italian coronavirus death rates so high?

Everyone has an opinion here: (a) the Italians are old (and on average they do have a very elderly population compared to other countries) (b) free healthcare means a lot of those elderly were in trouble anyway but were kept alive beyond normal years by that healthcare system (c) Italians are disorganized (d) Italians are more social (e) Italians were quickly overwhelmed so testing only reflects worst cases, and thus skews stats (f) other generalizations about Italians (g) who knows?

Honestly, at this point, there are just as many opinions as blog posts. What everyone seems to agree on? The only thing keeping it from being a lot worse is social distancing…

Why are German coronavirus death rates so low?

The general consensus is that German’s have their sh*t together. The more nuanced opinions seem to range from (a) they’re testing far more of the population so the death rate is simply more accurate than in other countries to (b) they’re missing some of the deaths among the elderly or mis-attributing them to other causes. Whatever the final answer, my guess would be the “sh*t together” answer is probably closest to accurate, if not exactly scientific.

The Guardian asked this question a few days ago and had no great answer, but some nice conjecture: “Crucially, Germany started testing people even with milder symptoms relatively early on, meaning the total number of confirmed cases may give a more accurate picture of the virus’s spread than in other states.” – The Gaurdian, Mar 22

And if you look around online, you see a lot of similar guesswork: “When trying to explain why Italy’s case fatality rate is more than 20 times higher than Germany’s analysts point to age as a possible factor. But, Germany has the second oldest population in Europe, just behind Italy.” – Forbes, Mar 22 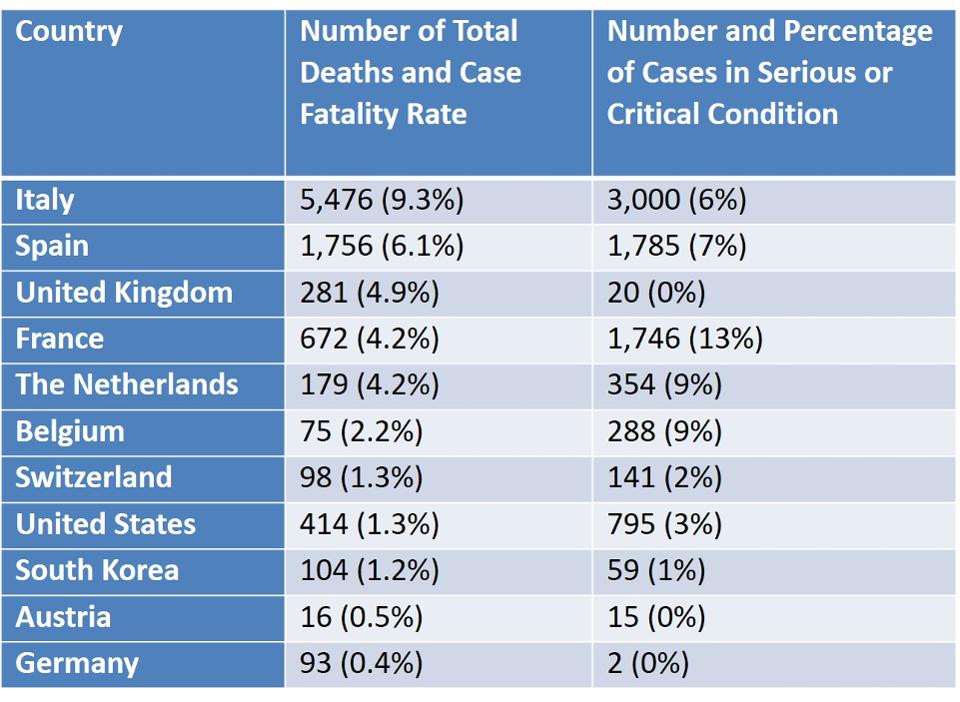 So the answer? No one knows. Further research is needed, which is unfortunate, because it would be great to emulate a system that is working so well.

What will US death rates be?

I don’t think anyone has any idea. We’re a week or so behind of Italy in terms of exposure, and more than a week behind Germany in terms of response. China has come out around 4%, so my guess would be 1% to 5%, with vast variance by state, and probably closer to 1-2% if we stick with social distancing policies. No matter where it falls in that range, it’s much higher than the seasonal flu rate of approx 0.1%. How seriously should you take my guess? Not seriously at all.

As noted in Live Science, “A report published March 13 in the journal Emerging Infectious Diseases adjusted for the potential time delay between hospitalization and death among cases in China. The authors estimated that, as of Feb. 11, the death rate from COVID-19 was as high as 12% in Wuhan, 4% in Hubei Province and 0.9% in the rest of China.” That’s quite a range.

Why does the coronavirus death rate matter?

Well, aside from lives lost, it matters in terms of ROI analysis; how big an effort, and how big an economic loss, should a country expect to prevent a certain level of coronavirus deaths? I guarantee this will be a topic in the coming weeks, especially now that Trump has said, “We can’t let the cure be worse than the problem itself.”

What do you think the right balance is between the preservation of life and costs to the economy?