The Coronavirus Murders: Trump & the Cost of Incompetence

We’re at just the beginning of the serious part of the coronavirus COVID-19 outbreak in the USA, and the President of the United States, Donald Trump, has proven himself so incompetent he might as well be killing Americans himself. I don’t mean this lightly or even metaphorically; there is no real difference between intentional murder, grotesque incompetence or irrational arrogance if the outcome is the same--the unnecessary deaths of Americans Trump is supposed to be protecting. 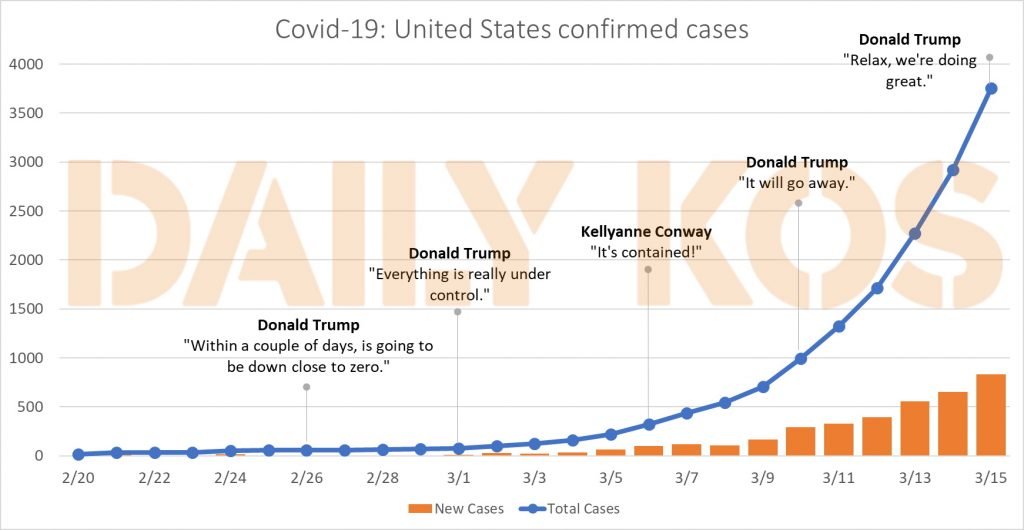 I know what you’re thinking; the virus isn’t his fault. We were caught by surprise, he’s doing his best, etc., etc. I can’t help you if you believe that; you’re lost to the rational world. All I can do is try to quantify what I mean.

Note: As of March 26, the USA has surpassed both total cases and deaths projected as reasonable in this post just a week ago. So, the murder-by-incompetence has begun. We have more cases than any other country, and added more cases today than the next two countries combined. Trump has done us ugly.

If you look at the outcome of a concerted coronavirus response in China, a tyrannical and authoritarian country, you get a feeling for the maximum level of effectiveness of quarantines and restrictions (after denial fails, of course). As of today, there are 80,880 cases of COVID-19 in China, a country of 1.44 billion people–meaning an infection rate of 56.2 people per million. Assuming it will grow a bit over time, let’s call the low bar, the ideal minimal rate of infection 60 cases per million in countries susceptible to the virus. This is just a relative point, it doesn’t matter if it’s accurate. It just means that, within a few months, about 86,000 Chinese will get the coronavirus. 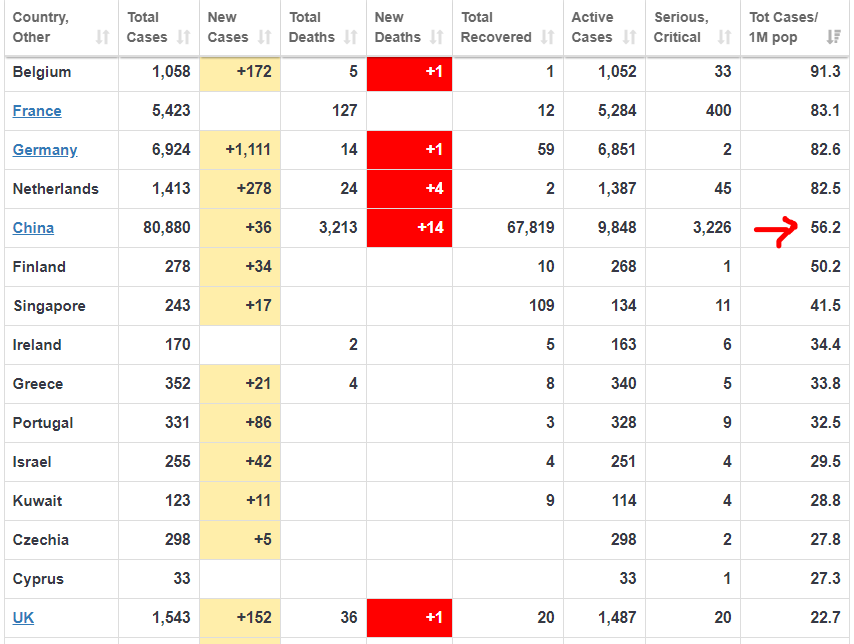 If you look at the opposite end of the spectrum at a western democracy that has clearly failed to address the virus, Italy (sorry, guys), you have 24,747 cases and growing in a country of only 60.5 million, meaning an infection rate of 409.3 per million. Let’s assume that grows to 500 by the end of all this, providing our high-end worst-case scenario. That means that if things are done really badly, a country might expect 500 of every million to be infected, so Italy will see at least 30,000 infected in the near future. 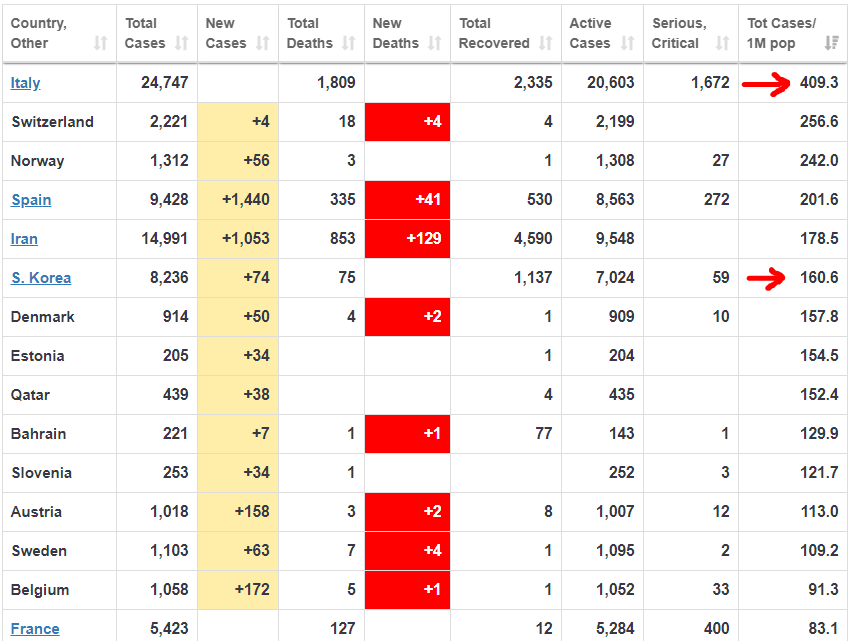 Given that the United States is not a communist dictatorship, and  hopefully has a better healthcare system than Italy (which is now questionable), we should see an infection rate somewhere between 60 and 500 per million. Given a population of 320 million, this means between 19,200 and 160,000 infections–both highly conservative estimates compared to real worst-case scenarios. These are just near-term numbers.

South Korea, which we seem to regard as a solid democracy with good healthcare controls and a strong reaction after a bad start (hopefully like us), has an infection rate of around 160 per million as of today. Let’s just assume this works up to around 200 within a month or so. This means that we should reasonably expect that, if the US outbreak were managed just as effectively–which we have every damn right to expect from our Commander-in-Chief and leader of the free world–the US should see no more than 200 cases per million, over the near term, and that any higher rate of infection reflects the incompetence or willful stupidity of the Trump administration.

In other words, if more than 64,000 Americans get the coronavirus over the next few months, then every one of those additional infections, and every consequent death, is the literal, actual fault of Donald Trump and his idiocracy. The current number is 4,046–which everyone knows is too low given poor testing rollouts–but given that alleged floor, President Trump has 60,000 cases to go before he proves to be an incompetent murdering scumbag.

Looking at the same statistical aggregate source, Worldometers.com Coronavirus page, you can see how many people have been reported dead by this point in time (March 16 around 10 am) in the fourth column. This snapshot was taken before Italy updated the numbers for today. 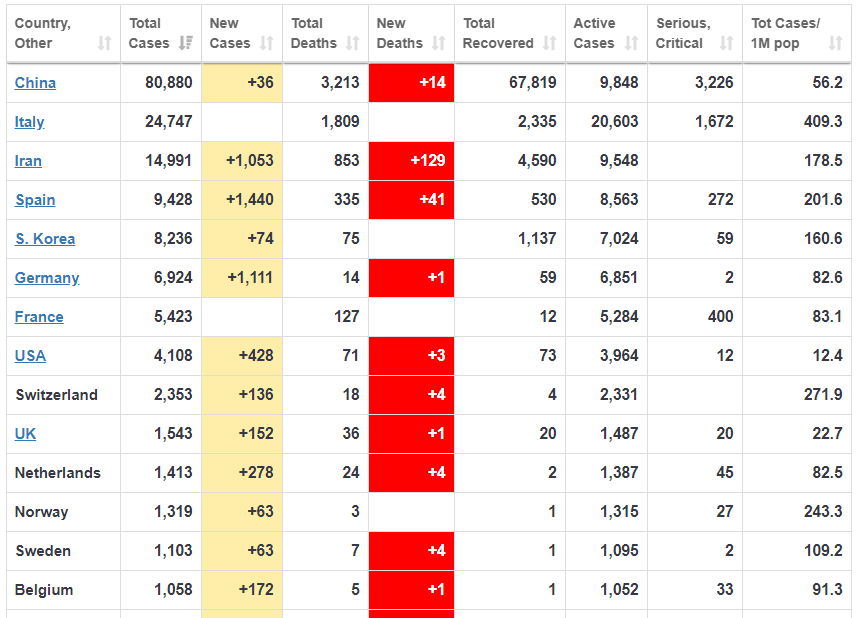 While not shown in the table, the resulting death rates (deaths per infected person) are as follow:

In other words, while China has done a great job suppressing the rate of infection, it has a very high death rate around 4% (possibly due to the number of elderly, time to address epidemic, etc.), while South Korea is a far lower 0.9%, and Italy is just terrible at more than 7%. For the sake of argument, let’s just say that Trump, with what he claims is the best medical system on Earth, the largest economy and the best brain, can keep our death rate down to the German level of 2%. Anything above this is incompetence bordering on willful negligent homicide, and anything below is his very special genius. Given we’re at 1.7%, he’s doing a great job!

With the infection and death rates, we have a few obvious scenarios:

As of today, 71 people have died in the USA. That means that a reasonable level of management and government coordination should result in no more than an additional 1,201 US deaths over the next few months. Anything more than that lies at Trump’s feet. If he’s going to take credit for the stock market (until recently), the economy (until recently) and everything else good in America, he also has to own our response to COVID-19.

So what does that mean? As far as I’m concerned, if more than 1,200 people* in the USA die of coronavirus over the next few months, Trump might as well have killed them himself. And when all is said and done, whether re-impeached or tried for genocidal incompetence, he should pay for what he’s done to this country.

Of course I hope I’m wrong. Maybe he is a very stable genius. Let’s all hope so.

( * ) Note that it doesn’t matter what the actual number is right now–what matters is that, over time, it will become clear what the infection and death rates are in well-manged democracies, and in badly managed ones. Whatever the difference is, that is Trump’s doing.

For instance, an NYT article mentioned stated that “Between 160 million and 214 million people in the United States could be infected over the course of the epidemic, according to a projection that encompasses the range of the four scenarios. That could last months or even over a year, with infections concentrated in shorter periods, staggered across time in different communities, experts said. As many as 200,000 to 1.7 million people could die.” Here is how quickly things changed in Italy:

But all this means is that the final death tally might be far higher, and Trump may have far more to answer for…