This may or may not be part of a series on stupid liberal and conservative political memes, but let’s just assume it is so the title makes sense. 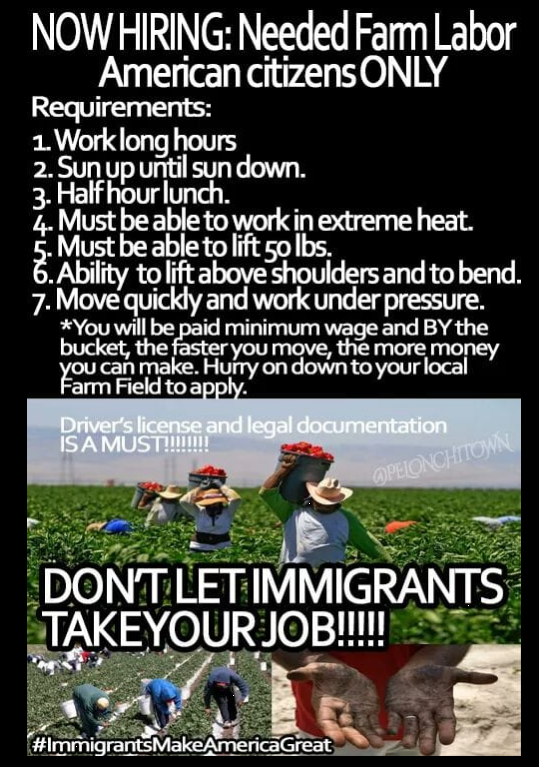 Not sure who produced this, so attribution pending.

In other words, working on farms is hard, dangerous and poorly compensated work that only immigrants from third-world nations would possibly want to do. If American citizens wanted to do the work, they would be doing it already. So, how can you oppose immigration if you don’t want to do these crappy jobs? Ha ha!

Look, it’s funny because it’s true; Americans don’t really want to do these farm jobs so we need immigrants to do them, and thus opposing immigration doesn’t make a lot of sense.

But, and it’s a big damn but, Becky, this implies that liberals now support corporate agribusiness policies that have led to the very crappy work these immigrants are being brought in / allowed in to do in the first place. After all, if the issue is really terrible working conditions and abusive wages, I don’t think the right liberal-progressive answer is to find people poor and defenseless enough to do that work so we can look the other way. The right answer is, presumably, improving working conditions, improving wages, improving labor negotiating positions in agriculture, and thus making these jobs ones that US Citizens might actually take.

“The entire agricultural industry’s greatest subsidy is the lack of protection for agricultural workers,” said Margaret Gray, who interviewed 160 farm workers in New York’s Hudson Valley for her book, Labor and the Locavore: The Making of a Comprehensive Food Ethic. “The system was dependent on the exploitation of slaves. That legacy carries through and directly affects farm workers.”

I know there’s a middle ground in there, but this meme don’t care. This meme is all about how stupid the GOP is not to realize that we’ve got a great deal with these defenseless immigrants, and if we don’t take advantage of them on our farms, someone else will. We can’t have that. So apparently what we need is unlimited undocumented labor that agribusiness can continue to abuse.

I’m not trying to be a douche; I know that’s not what the creator meant, but our failure to intelligently and humanely address immigration issues in this country is so complete it’s almost perverse. By encouraging an endless flood of cheap labor, good or bad on ethical grounds, liberal immigration policies are supporting conservative anti-labor policies because, well, they work. And we all keep buying the wonderfully cheap and plentiful food that collusion provides.

So, yeah, it’s funny, but I don’t think the glorious upside of labor exploitation is really the best argument for the humane treatment of immigrants, legal or illegal. We shouldn’t need to believe immigrants are economically useful to know they’re human beings and should be treated as such. And if we genuinely want both humane immigration policies and improved labor conditions, then we better be ready to pay for more for our kale. And I mean, a lot more.

Have you seen a conservative or liberal meme you hate? Let me know. Maybe it’s even stupiderer.