Is Calling LV Shooter a ‘Lone Wolf’ Racist or Privileged?

Posted by Posilicious on October 3, 2017 0 Comments

A little context will help. There is no doubt that, historically, violence committed by minorities in the US has been seen as representative of that minority group (e.g., blacks, Muslims) whereas violence committed by whites has been seen as more of an individual or radical group act. As a result, there is an understandable demand by many that Las Vegas shooter Stephan Paddock be classified a “domestic terrorist” as any Muslim would be, in all likelihood. And an understandable anger when he is not.

My specific question here is about confirmation bias when the Lone Wolf label applied to Paddock in the media. An example from MSN: “Stephen Paddock, Las Vegas Suspect, Was a Gambler, a Cipher, a ‘Lone Wolf’.” If you do a search on google for “Stephan Paddock “Lone Wolf”“(The quotes around “Lone Wolf” are asking Google for an exact match) , you’ll get more than 250,000 results. Many of them are articles about the shooting. Many of them are arguing that the term applied to a white terrorist is misleading, racist and privileged. But is it?

Here is a video on Facebook by James Jefferson J. (JJJ) referring to this very issue. It received a million views, about a million more than this post will get, and thousands of supportive comments. His key point? That they shouldn’t call Paddock “Lone Wolf,” they could call him a terrorist, because that’s what he was, and they are only failing to do so because he lacks “brown skin.” The anger, pain and in this man’s impassioned video are obvious: 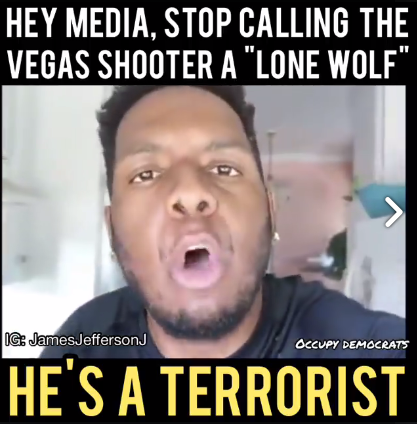 The strange thing about this video and JJJ’s anger is that it assumes something you can easily disprove be searching online. The term Lone Wolf as applied to these types of terrorists (i.e., lone wolves are a sub-type of terrorists by definition) originated with white supremacist groups. Police have adopted the term to refer to terrorists that act alone rather than in concert with a terrorist group. Hence, lone wolf.

All of which means that the media is calling him exactly what they should, and they called Dallas shooter Micah Johnson (a black man) the same thing — a loner or lone wolf terrorist because he acted alone. They are using an appropriate term to describe a particular behavior that is vital to both name and understand because attacks by so-called lone wolf unaffiliated actors are on the rise and, while they are terrorists, they are far harder to predict and prevent.

For comparison, if you search on Google for Dallas killer Micah Xavier Johnson, the first link you see is for an NBC article entitled, “Dallas Shooter Micah Johnson Was Army Veteran and ‘Loner’.” In other words, a black, anti-white, sniper who killed multiple police in an act of premeditated domestic terror was called a very similar thing to Pollard in the mainstream media (a “loner”). And ABC asked, “Was Dallas Gunman a Lone Wolf Terrorist?” In this case, the label is both “lone wolf” and “terrorist,” clarifying that the former is a type of the latter.

A search on Google for “Micah Xavier Johnson “Lone Wolf”” on Oct 3, 2017 returned more than 14,000 results. The same search using “Terrorist” instead of “Lone Wolf” returned about 59,000 results. To give this context, his racially motivated murder spree was in July of 2016, so more than a year has passed. I suspect there are fewer returns here than for Paddock due to the number of people killed, but I’m not sure.

The point is that both black and white killers are called Lone Wolves when they are not affiliated with a terrorist group. Thus it is not only unfortunate racial confirmation bias leading to JJJ’s outrage (though I suspect he was probably just as angry about violence per se), but that he and every person that agreed with him further reinforced their own confirmation bias while inferring racism where it does not exist and undermining use of an important term.

Keep this in mind: Male social isolation is highly correlated with unpredictable violent behavior. If we forget this, if we lose the term and what it means by just calling him a terrorist, we miss the point — and the opportunity to address the specific issues that lead to this kind of terrorism rather than organized “standard” terrorism.

So, honestly, the video saddens me. It is an honest and open reaction to violence and perceived racism where none exists, or least least does not obviously exist. And it doesn’t help the victims or prevent further violence. It is a lost opportunity all around. 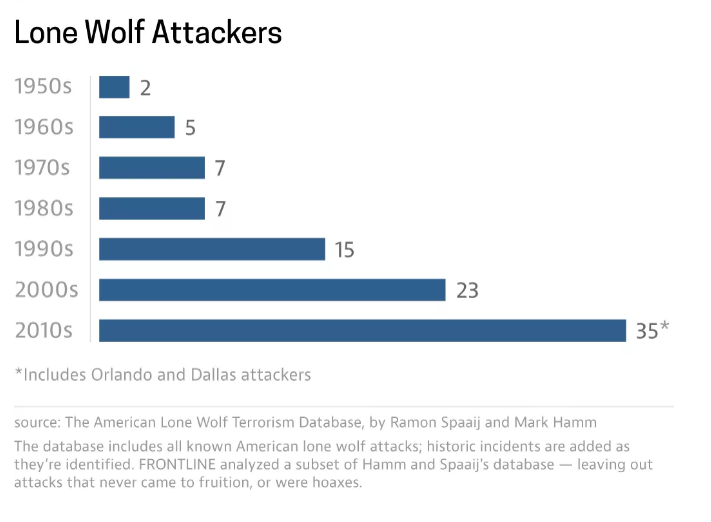 Of course, you may disagree. Here is an article by someone who clearly does, but if you read the article, the author Shaun King either accidentally or intentionally misconstrues the term in a different way — he assumes that the concept of “lone” is problematic because it separates him from other whites and thus does not bear the group-condemning weight of “Muslim terrorist” that “white Christian terrorist” presumably would (I don’t know if Paddock was a Christian or not). King may be right about this, but that is neither the intent nor meaning of the actual term.

In the end, all I can say is that racism exists, privilege is real (at least contextually) but that does not mean that everything is racism or that the coverage is in this case evidence of either racism or privilege. It just means this psychopath acted alone, and that’s scary enough, isn’t it?

So, fine, let’s figure out a better way to have this dialog. The word “wolf” is probably too romantic and proud a term for such vermin. Let’s change it to Lone Rat if that sounds better. But there is a reason for these terms, and it’s not always a conspiracy.

NOTE: The term Lone Wolf is controversial in other respects because wolves in this context are rarely truly alone, and it’s often obvious in retrospect that they were troubled human beings. But that’s not the point of this discussion.