Did this yesterday with Andre and Kam.  In every way a great day, with perfect weather and fantastic company.  We started via Momyer and finished via Vivian Creek, covering all nine peaks in between, in just under 13.5 hours.  A very quick trip report follows.

For some reason, perhaps to due keeping my phone in my pocket, many of the photos are fuzzy or otherwise just plain silly. So imagine them really bright and beautiful, and you’ll enjoy the experience more.

Andre had been coordinating this originally so that we would go up in two cars and park at separate trailheads to allow an easy car shuttle back to the trailhead at the end of the day.  After one of our group dropped out, Andre sensibly decided to take one car to the trailhead and just figure out the shuttle at the end of the day.  So we arrived at Vivian Creek around 5am to try to park, but a large gate told us to bugger off (the parking area didn’t open until 6am), so we headed back down to park at the Momyer trailhead.

This decision radically and literally changed the profile of the hike.  We had originally planned to start up Vivian Creek to San Gorgonio, then proceed down the ridgeline toward San Bernardino.  This plan was now reversed, meaning the hardest part came at the end of the the day and not the beginning.   As it turned out, this meant a far more satisfyingly dramatic and beautiful finish to the day.

We started up what I believe is the Falls Creek Trail in the dark around 5:15am.  The climb winds up and down a bit before turning more steeply upward, and soon we were gaining altitude quickly under a bright western moon.  I was feeling very engergetic and fresh, perhaps due to a mass of carbohydrates for breakfast, but always in my mind was the awareness that Kam and Andre are far more athletic than I am.  My primary hope for the day, along with finishing the traverse without bonking, was that I not slow them down too much.

The sun soon rose over a very beautiful valley with snow-lined chutes on the opposite ridge, and then we came to the clearly marked junction with the Momyer Trail.  I had been worried from the map and other posts that the junction would be hard to see, but it was well signed and marked, and the trail itself proved to be well maintained and easy to follow.

We were soon gaining elevation even more rapidly as the trail wound up toward the ridge just north of San Bernardino Peak East.  Along the way, we passed through a long section of overgrown manzanita and prickly bushes that proved nicely exfoliating of my lower legs, and then we crossed east across the lower prow of SBE peak.  The trail then does an odd and prolonged eastward traverse under the ridgeline, probably meant to bring it closer to the middle of Anderson Flats, but it’s hard not to just cut straight upward to the ridgeline and get the climb over with.

Once on the ridge and the SB peak trail, we turned back to the West and headed toward the two SB peaks and the start of the traverse itself.  We dropped our packs on a lightly snowy section of the trail, and were off, feeling much ligher and a bit springier.  To the peaks!

While there were frequent patches of packed snow on the trail, the weather overall was perfect; mid-fifties perhaps, under bright sun and clear views in every direction.  I must have commented 20 times on how great the weather was.  Not too hot, not too cool.  Just right.

We made San Bernardino Peak in no time.  Andre signed the log register, which I realized he intended to do on every peak.  “It doesn’t count if you don’t sign,” he said.  Plus it was more fun that way.  Then back to SB Peak East and, a few minutes later, to our packs.  They seemed to have gained weight since we left the, but on such a beautiful day it was hard to care.

In short time we were on Anderson Peak and then Shields, the last of the peaks I had been on before.  We checked the map and squinted east to try to identify the next peak, Alto Diablo, but it was rather hard to figure out which diminutive lump was our next destination.  As it turned out, Kam and I walked right past it at the end of the next set of switchbacks, and only Andre calling us back avoided us missing Alto Diablo entirely.

After Alto, you descend into the Dollar Lake Saddle and pass the junction with Falls Creek Trail coming up from the west (the trail we had started on in the morning before turning onto Momyer).  From the saddle, Charleston Peak loomed above us with a snowy countenance meant to intimate that this is where the hard part fo the traverse began.

We started up the trail until we came to a logical point to start our climb up to the peak, sat down for a bit of food (which we had done several times that morning, making the overall pace quite pleasant) and then started breathing heavily.  Well, we started trudging up to the peak, and then the heavy breathing started, followed rapidly by some really awful singing.  Andre and I seem to have the same odd predilection for singing loudly and randomly as we climbed, which I’m sure the local fauna enjoyed as much as we did.

Peak six down!  I made some triumphant monkey noises, don’t ask, and we signed the register.  Off to number seven!

Little Charleston is a short jaunt down and a across the ridgeline, which was done in no time.  Above us, however the northern flank of Jepson and San Gorgonio loomed both sadistic and beautiful.  There was apparently a bit of climbing ahead.

In short course, we were gasping our way up the western flank of Jepson, Andre kicking nice steps in the snow until we reached the snowless, rocky peak.  Wait, no, that’s the peak.  Wait, no that’s the peak.  Wait…well, you get the point.  It does roll on a bit, but when we got to the top of #8, San Gorgonio looked tantalizingly close and San Jacinto was visible in perfect profile across the Imperial Valley.  Beautiful.

A short while later, after passing the only groups of hikers we say that day, we arrived on the peak of SG and our traverse was done.  Nine down, none to go, and time for the last of the victory donut holes.  Delicious carbohydrates.

After the final peak, we started a running, walking, stumbling, flying descent down Vivian Creek Trail, reaching the bottom just as darkness set it around 6:15pm.  We crossed the riverbed near the trailhead and then Andre gave me his pack and started off running to go get the car back at the Momyer parking area.  Show off.

In terms of hikes, I can scarcely remember a more pleasant day or better company.  We may have seized up a bit on the drive back, but all in all, awesome.  I have literally no idea how long the hike was distance-wise, as there was a fair amount of trail offness going on, but more than 20, less than 30, with a lot of up and down along the way.

A few comments for my reference:

For food, everything seemed to work so the 250-400 cal / hour target is about right, mostly carbs, but with the meet / cheese additions working very, very well when stopped or moving slowly.  I keep carrying the pop tarts and energy bars, but never eat them.  Attempts to eat dates, mango slices and other natural stuff improving but trivial in terms of total calories.  Gus and electrolyte mix, donut holes and Gin Gins, are all perfect when balanced.  Accept no substitutions for Ritz.

For water, I carried and drank 5.5 liters of water and that felt just about right.  I could have drunk less, or more, but it’s the right ballpark.  I think Andre drank around 2 (with 1 left over) and Kam maybe 3 with none left but wanting more.  What this means is I eather learn to sweat less or I have a real water and electrolyte depency issue that is limiting in some ways.  Still, on this day, the added weight didn’t seem to matter much.

Physically, I felt fine and energetic all day.  My legs were a little tired by the end and I had a nice little shin splint, but could easily have gone longer.  Seized up in the car on the way back and was ridiculously tired once I got home, but otherwise all good here.  Shoes (Gortex Salomon trail runners with two pairs of thin socks, one set toe socks) worked perfectly but I notice a constant increase of pain without blistering on the balls of my feet — so either stride or foot shape issues to consider.  Back pain definitely something to work on.  Mentally, better than the week before.  Probably related to overall physical energy levels and beauty of terrain.

In terms of gear and such, the forecast was for 39 at night in the valley and low 50s with sun along the ridgeline all day, with clear skies and 5-10 mph winds.  Despite my tendency to run hot, I packed a light pair of gloves, glove shells, and a wool hat, and top/bottom long underwear, none of which ever made it out of the pack.  I did put on the light shell and Sherpa vest when sitting in the wind on top of San G, but that was the only time I was wearing more than shorts and t-shirt.  So, perhaps need to bring less based on equivalent weather reports. 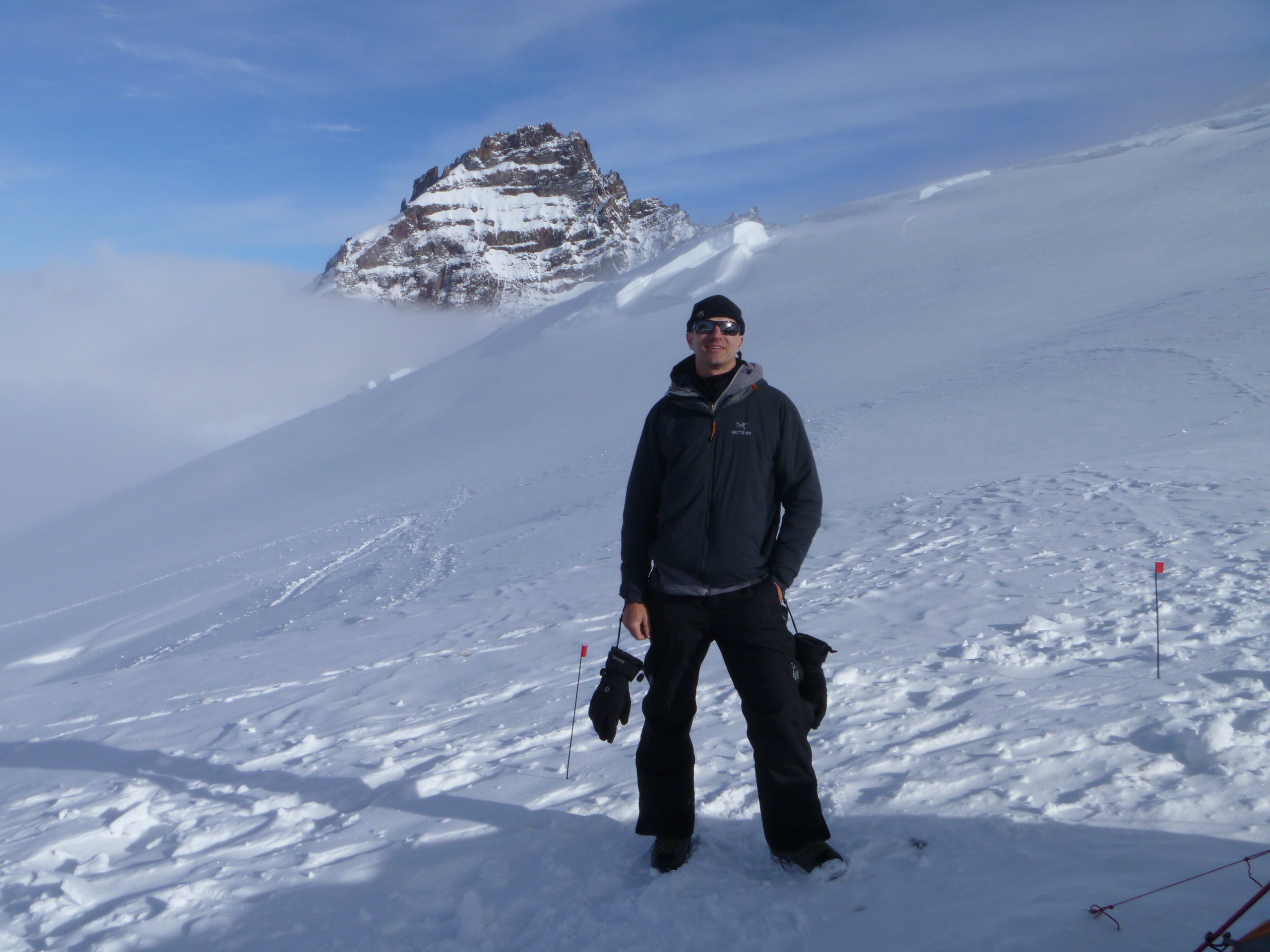