This is the third time I’ve done this hike in some form.  In 2005, I did the pass with my friend Ray and then went off-trail scrambling over to the Golden Trout Lakes and down that canyon.  In 2007, Kelly and I walked up to the pass and back.  I always wanted to return and go all the way to one of the Kearsarge or other lakes in valley below.  So this hike took me to Charlotte lake.  Well, almost.

As always, this is a beautiful hike.  Great views from the Kearsarge pass, scenic Sierra lakes, a pretty mellow and well-maintained trail, and some nice altitude at Kearsarge Pass (11,500’+).

Just a quick 20 minute drive up from Independence to the Onion Valley parking area and trail head.  There are bathrooms and communal bear lockers, so not exactly a rough starting point.

In June, there’s still a fair amount of snow in places over 9,500′, so I took extra cold weather and emergency gear that put my fully loaded pack weight over 30 pounds (for a day pack!).  This includes 2.5+ liters of water and trekking poles, but it’s a bit ridiculous for a day hike.  Need to work on the weight.

Because of the snow, my gear included trekking poles, which I don’t use otherwise, and Kahtoola microspikes, which rock.  See links below.

Also, I’ve had some trouble bonking on long hikes in the past due possibly to my unparalleled ability to burn through calories and sweat out every electrolyte in my body.  Cliff bars, let’s be honest, just don’t cut it.  So for this hike I took some Vitalyte electrolyte solution and Honey Stinger energy chews to see if they helped.  And they did.  I think.

My daypack is my usual Camelpack Transalp that I bought as a bomb pack for a ski trip to Chile in 2000.  Great pack overall, though starting to show its age.

According to the Sequoia and Kings Canyon National Parkshiking guide book, the round trip to Charlotte Lake is about 16.5 miles and should take 8-9 hours.  This takes you from the Onion Valley lot at 9,185′ to the Kearsarge pass at 11,823′, down to Charlotte Lake at 10,384′, and back.  Total climbing is about 4,150′.  It was about 50F at the trail head on a cloudless day.  Not sure of temperature at any other point.

The Kearsarge Pass Trail starts with a series of mild switchbacks that take you up along Independence Creek.  You quickly pass the John Muir Wilderness marker, Little Pothole Lake and reach Gilbert Lake in about an hour.

On this trip, I ran into two deer almost immediately (see pictures).  Apparently I looked more ridiculous than threatening, because they took some time to check me out before disappearing into the manzanita.

Somewhere near Flower Lake, the trail was completely lost in snow as it headed up the canyon headwall.  I couldn’t find tracks anywhere, so I slipped on the spikes and started a slow climbing traverse to the trail I could see above.

This was dumb; I almost immediately realized that any sensible person would have stayed low and climbed more directly up the headwall rather than risk a pointless traverse.  And when I looked down at the more sensible path, I could see the tracks of all those more sensible people.  Well, fine.  At least I got to make fresh tracks.

The switchbacks soon emerged from the snow I continued up toward Heart Lake.  Not sure exactly where, but at roughly this point the westerly winds picked up to 20+ mph gusts that brought a bit of a chill.

The wind blew harder with every step toward Big Pothole lake. Just before heading up the main part of the traverse up the main headwall to Kearsarge Pass, I met a nice family who had turned around due to the wind and lack of crampons.  They looked pretty excited to be walking downwind back to camp at Gilbert Lake.

Near the top of the traverse (just out of the wind on the pass), I ran into a nice Scottish lad and recent graduate of St. Andrews who was through-hiking the PCT and had just done Whitney.  He looked like he might have run up it, taught some tourists the highland fling, done a few jumping jacks, then run back down.

At the top of the pass, after quick lunch, I was joined by a girl also doing the PCT who looked like the hike had run over her; she was sick, wheezing and had that nice dry raspy sound that makes breathing at altitude so much fun.  She seemed more than a little excited to be taking a break from the trail and having nice warm dinner in Lone Pine.

And then I grabbed onto my hat, leaned into the wind, and lunged down the switchbacks into the Kearsarge Lakes basin.

The switchbacks down from the pass offer a fantastic view of the Kearsarge Lakes and Bullfrog Lake farther down the valley / basin.  At the bottom fo the switchbacks, patches of snow covered the trail every few hundred feet, some for just a few feet, some for far more.

Now I should not that on a good clear day like this it’s basically impossible to get lost in this valley.  Kearsarge is pretty visible straight to the east at most times.  The real issue is time; losing the trail meant going cross country, which is slow at best, or re-finding the trail, which is just as time consuming without a topo map.  Net-net; no big worries, but time was an issue.

That said, I had a lot of trouble following the trail.  And yet somehow I reached the lake.  I sat down.  I took out a nice PB&J sandwich for lunch, and then realized that this was a more like a puddle than a lake.  And no way had I gone 0.8 miles.  I had found Charlotte’s Pond or Charlotte’s Not-Quite-Lake or just some random bit of collected runoff.  Blah.

So I threw the back back on and proceeded to trudge over snowbanks in a zig-zag pattern that helped me find the trail every now and then.  After a while, I realized I was burning time and had no idea how far the lake was.  Could be fifty feet.  Could be 0.8 miles.  Just hard to track linear distance without a good map.  So, I declared victory and turned around.

Yes, this was a wimpy move, but I was a alone and not that used to hiking on my own, so it seemed like the better, if more boring choice.

I was just thinking how much easier it was to follow the trail despite the snow on the way back when I realized I wasn’t on it anymore.  It was just gone.  I looked here, there, and some otherwhere, and found a lot of places where it was not.

So, I could have backtracked to the last place where I was on the trail, but that seemed lame, so I guessed and started heading up the ridge above Bullfrog Lake.  I was pretty sure it had to be above me b/c the trail takes a high traverse across the rockfalls over the lake and, sure enough, ten minutes later I was back on the trail.  Wouldn’t have been that easy or fun in the dark, but that’s the great thing about hiking in the summer — plenty of sunlight.

And soon enough I was back at the base of the Pass headwall.  The wind was at my back, and the climb should have been easy.  But I was more tired than I expected, even at 10,000+ feet.

I often have a moment about 6-10 hours into a hike (depending on heat, altitude, etc.) where I have a pretty distinct bonk or energy crash.  I’ve been trying to work on this with different foods, electrolytes, etc., so on this trip I tried two new things:

Vitalyte Electrolyte Solution.  This lemony mix was added to one 1 liter of water and consumed just after lunch.  Not sure if it helped, but it made the water yummier.

Honey Stinger (Cherry Blossom) Organic Energy Chews. These things may not sound very manly, but they are the bomb.  If craving them is a sign of your body’s need for what they offer, then they are a fantastic source of energy for the hike.
Despite the electrolytes and chews, I still felt a bit tired and slow going up the Kearsarge pass again, but the crash was more measured, so I take this as a good sign.  Maybe I’m supposed to be tired at this point in the hike ;).

While I had run into several groups of hikers on the outbound trip, I didn’t see anyone on the way back until I reached a large rock field near Flower Lake (I’m guessing here).  Halfway across the field, I caught up to a couple who had a beautiful young Akita that seemed just as happy as they were to be heading down.  Apparently altitude had not been kind to any of them.

Aside from sliding down a few snowbanks, it was an easy walk down from there and I was back in the parking lot in about another half hour.

All told, the day after leaving sea-level and without trying too hard, the hike (inc. lunches, etc.) took almost exactly 8 hours.  Total distance covered depending on how close I got to Charlotte was about 16.4 to 16.8 very beautiful miles.

I am about as amateur a hiker as you can get.  This is really just a journal for me and shouldn’t be treated as expert advice on anything. 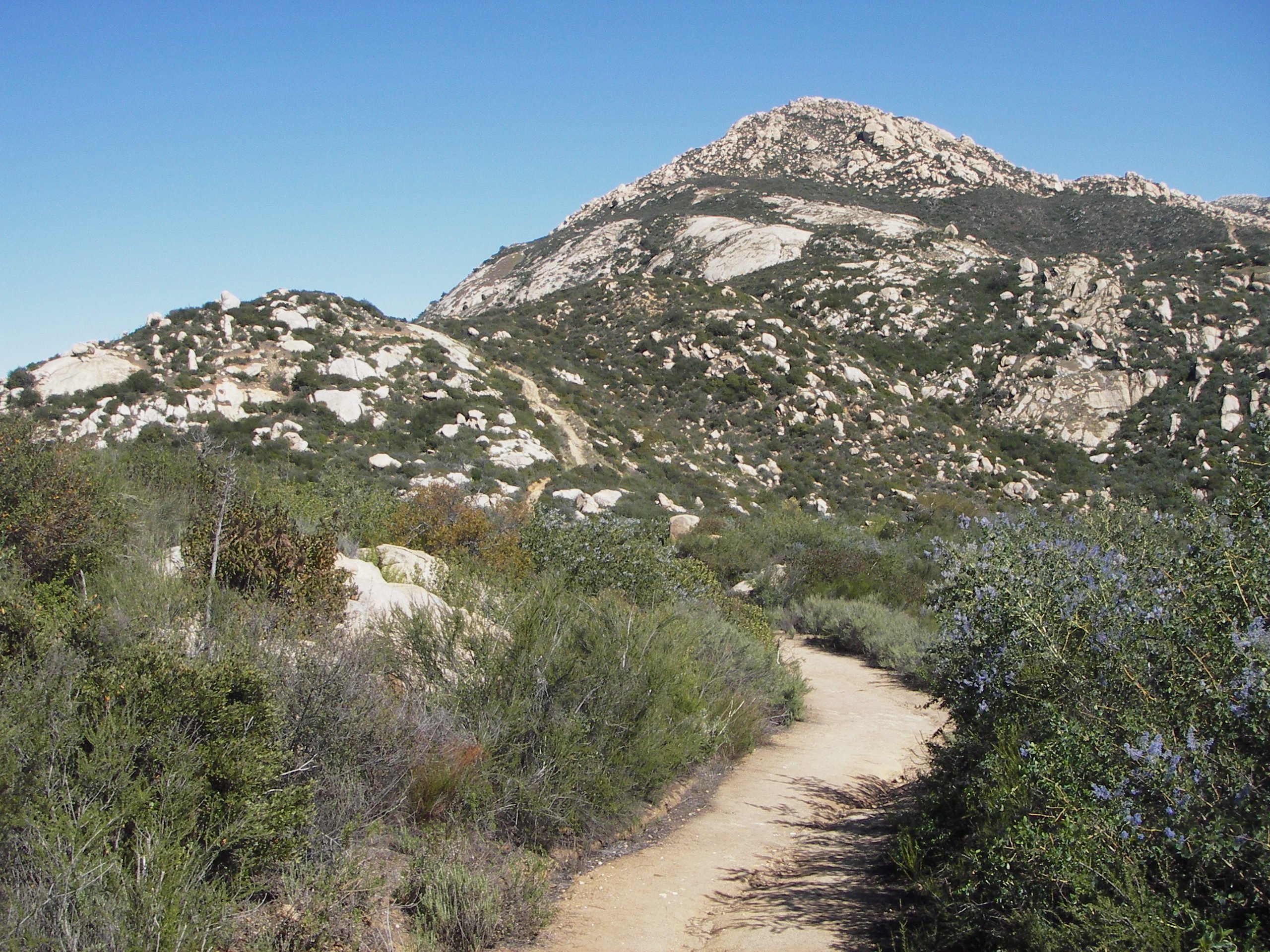